Barcrest is an online casino content developer which is based in the United Kingdom. It has been present in the iGaming industry for quite some time, so there is no wonder why its games are available across many different markets and jurisdictions especially after 2020 when Scientific Games or SG became the company’s owner.

After this acquisition, the company has managed to reach more markets which consequently brought more players its way who enjoy the company’s slot releases. Speaking of the company’s slots, Barcrest slot games are mainly crafted as flash formats, but there is also a growing number of HTML5-powered games which can be accessed via mobiles.

Some of the company’s most popular slot releases are Rainbow Riches, Monty’s Millions, Wild Knights, Crown Jewels, Arabain Charms, Pyramids of Giza, Snow Leopard, The Curse of Frankenstein, Money Mad Martians Cosmic Cash, Monopoly Big Event Slot, and Thai Flower. All of the company’s games are rather appealing packed with modern graphical solutions with several games which are more on a retro side.

All in all, the company’s collection of slot games features an excellent variety of titles with loads of bonuses, impressive graphics and stunning animations for a complete online gaming experience which is in many cases rather generous especially when playing the company’s releases that feature high RTPs as the included in the table below.

When looking into online slot games, besides checking paylines and paytables, you also want to check the games’ RTPs. RTP which stands for Return to Player is generally considered as a certain percentage that explains how much you can from a certain slot game in the long-run. In this sense, online slot games with higher RTPs bring better long-term returns and you definitely want to play these more frequently.

When it comes to the company’s slot games, you will not be disappointed as many of the most popular Barcrest slot games feature high RTPs that are around and above the industry standard of 95%. While the majority of its games feature favorable RTPs there is also a couple of games with not so favorable RTPs of around 95% which despite its lower RTPs enjoy great popularity among online casino players. Below, we discuss five of the company’s most profitable games in terms of their RTPs.

With an extremely high RTP of 98.20%, Dr Jekyll Goes Wild slot is the company’s most profitable game in terms of its RTP. This exciting Barcrest release is inspired by one of the most popular fictional characters Dr. Henry Jekyll and Mr. Edward Hyde who is the doctor’s alternative personality. The game comes packed with 5 reels and 10 paylines offering loads of bonuses to explore including its Free Spins bonus that players trigger with landing bonus scatter symbols. During this bonus mode, players earn additional free spins thanks to wilds that land across the reels while the bonus also introduces special locked wild symbols.

Mighty Black Night featuring a favorable RTP of 98.00% is another extremely rewarding Barcrest release which offers super entertaining spinning actions across 5 reels and 100 paylines. The game is playable on all devices from only 0.10 credits per spin. the Mighty Black Knight slot features a special expanding wild symbol which once landed on the reels expands to cover all positions known as the game’s Mighty Reels mode. Then, there is also a super rewarding Free Spins bonus that brings 40 free spins while the Mighty Reels mode is also active. Lastly, players can also take advantage of the game’s Big Bet Mode during which the Mighty Reels mode activates more often.

Inspired by Bigfoot which are ape-like creatures which dwell in the ruthless wilderness, The Legend of Big Foot by Barcrest is an excellent release with a great RTP of 96.00%. With the very first spin on the game, players get to hop on an adventurous wilderness journey across the game’s 5 reels and 10 to 20 paylines. During the gaming sessions, the legendary creature appears randomly across the reels and as it does do, it triggers one of five mini bonuses including the Big Foot Wild Reels mode, Big Foot Respin Last Reel mode, Big Foot Respin Reels mode, Big Foot Symbol Swap mode and Big Foot Random Wilds mode. In addition to these, the game also features a Free Spins bonus.

With an excellent RTP of 97.75%, the Rainbow Riches: Home Sweet Home slot surely deserves its spot here. This Irish-themed game features 5 reels and 50 paylines. It is playable from only 0.10 credits per spin on both mobile and desktop devices. With the game, players follow our favorite lucky leprechaun once again on his amazing journey. As players follow him, they get to scoop more riches thanks to the game’s Knock Knock Bonus during which symbols randomly transform into wilds. There is also a rewarding Free Spins bonus included as well as a customary Big Bet mode which removes lower-valued symbols.

Another online slot game by Barcrest with an RTP of 97.75% is Snow Leopard. This game also takes players to an amazing wilderness journey across 6 reels and 40 paylines. As suggested by the game’s name, it is a snowy-themed release which brings one fully wild reel on every spin. During their Snow Leopard gaming sessions, players get to take advantage of loads of free spins. Just like the majority of other Barcrest-powered online slots, Snow Leopard also features a Big Bet mode which here introduces five linked spin during which players collect special scatters to get up to 100 free spins that come attached to awesome wild multipliers.

Barcrest Slots with the Worst RTP

In terms of RTPs on its slot games, Barcrest is one of the most generous online casino content developers as the majority of its slot release feature above the average RTPs. Nonetheless, there is a couple of slot titles with lower RTPs including Barkin’ Mad with an RTP of 94.00%, Lucky 5 Reeler with an RTP of 87.76%, Thai Flower, Rainbow Riches and The Curse of Frankenstein with RTPs of around 95.00%.

What are the best Barcrest Slots with high RTP?

What are the Barcrest slot machines with the highest payout?

How lucrative are Barcrest RTPs when compared to other companies?

What are the Barcrest Slots with the worst payouts?

While the majority of Barcrest-powered slots are highly profitable in terms of their RTPs, there are several releases with not so favorable RTPs including Barkin’ Mad, Arabian Charms, Black Magic Fruits, Captain Jackpot’s Cash Ahoy, Cashino Slot, Call of Fruity, Elvis Top 20, Lucky 5 Reeler, Rainbow Riches, Thai Flower, and The Curse of Frankenstein.

What are the RTPs of the most popular Barcrest Slots?

Who is the Barcrest CEO?

Is there a demo version for Barcrest Slots?

Yes, the majority of Barcrest-powered online slots is available for free play at many online casinos.

Are there Barcrest Tournaments?

There is a variety of rewarding online slot tournaments which feature some of the most popular Barcrest slots. 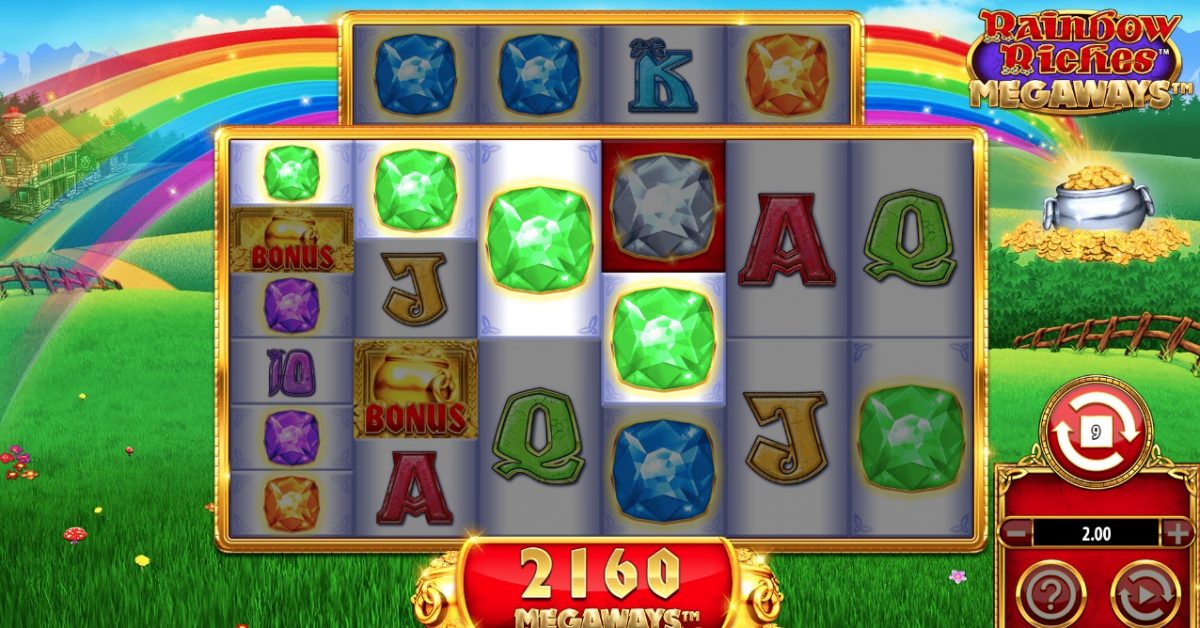 One of the most popular games on the market today, especially when it comes to the United Kingdom is Rainbow Riches. Rainbow Riches is present not only online but also in pubs, bingo halls and live casinos across UK.Many people love this game and would rather play this than anything else. If you have experienced it either in real life or through the desktop version and are worried that the gameplay may not translate over well to the mobile platform, there is no need to worry, as it is as equally seamless.

Is This The Game For You?

If you are new to Rainbow Riches, it may not be the kind of game you are looking for.The general sounds are pretty good and fit in great with the theme, while the leprachaun can be a bit horrific and teriffying to some players.Stacked symbols are not wild in the mobile version and the free spins are not available.It does have 3 click me features, with two of them being wheels of fortune for easy cash.

You might think that it is not worth your time playing Rainbow Riches as a result.

Is There Value In This Game?

The return to player in Rainbow Riches is 95% which may be considered relatively low.While the regular wins are not so big, they should keep you around long enough to trigger one of the featured wins.

This does require patience and the main one you are going to want to get is the rainbow and the pot of gold symbol which signifies the biggest wins. However, there is often no pot of gold awaiting for you, just like you have so often heard in the stories, and this is especially true until you have played 150 spins at least.
[casino_title page=”/barcrest/rainbow-riches”]