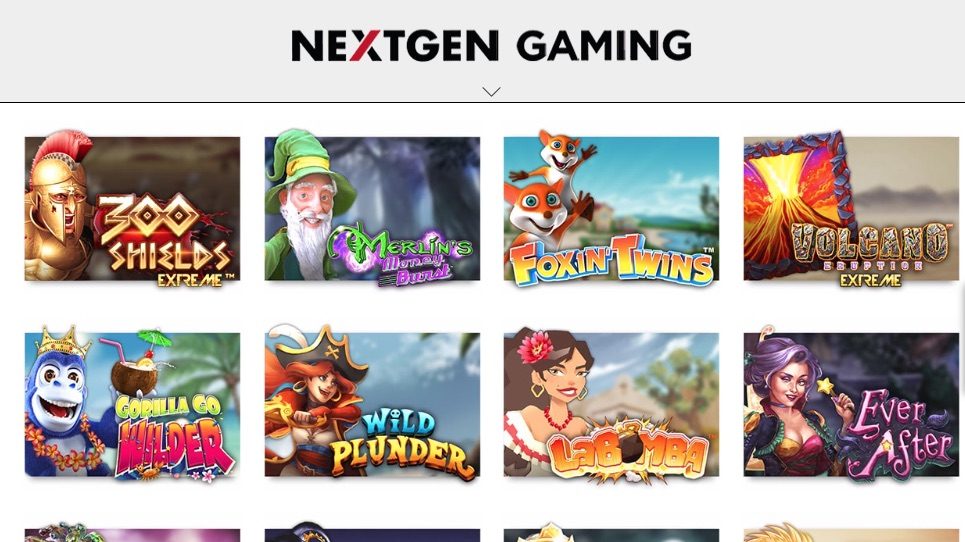 NextGen Gaming is another Australia-based company. It has emerged on the online gaming scene in 1999, so it is one of the first companies of this kind to appear. In its long, rich history, NextGen Gaming has produced more than six hundred online casino games of all kinds including video slots, classic table games and much more. Back in 2011, the company was acquired by NYX Gaming.

The company has developed a great range of online casino games which can be accessed via a wide range of gaming devices including tablets, smartphones, laptops and desktop computers. It should be noted that NextGen Gaming regularly updates its offer by adding more games including innovative slot games. Its slot games are characterized by state of art graphics and visuals, they provide excellent gameplay and they can yield generous riches.

Since the company has been around for almost twenty years, players can rest assured that NextGen Gaming knows shat they are doing. In fact, the company’s main focus is on the way their games feel, look and play. Hence, playing NextGen Gaming titles means enjoying a thrilling online gaming experience no matter which gaming device you choose.

The company has introduced several unique features into their online slot machines which help punters with placing bets. These features include the SuperBet mode which unlocks additional functions such as extra free spins, extra fees or ante and extra multipliers. Other innovations are the Up Wild which introduced increasing wild sensitivity and A-Play which offer players an amazing opportunity to pick their bonus modes such as more extra spins and lower multipliers or higher multipliers and fewer free spins.

Analysis of the NextGen Slots RTPs

NextGen may have the slot with the highest RTP ever on offer: Jackpot Jester 50k. However, it is not as if every casino offers this slot and the slot is really extremely minimalistic. Let’s say it’s not necessarily for slot enthusiasts. But if you can cope with a very minimalistic slot and especially look at the RTP, you will definitely be able to do something with this slot.

Independent of this, there are also some “normal” slots that range from high 96% to high 97%. These include well-known slots like Medusa (in different variants). There are definitely some slots among the top RTPs which – let’s say so – are not necessarily up to date. They leave wishes open at least in one respect or the other.

Basically, however, the quality of NextGen is already in order and you can also find the slots with high RTPs. Then you may have to settle for “only” 97% – depending on how choosy you are.

The Glorious Empire slot by NextGen Gaming is an impressive, history-themed game packed with 5 reels and 40 paylines. The game is all about the great Roman Empire. When it comes to the game’s visuals, during their Glorious Empire gameplay, players get to enjoy a true visual spectacle from the very first spin of the reels.

When it comes to the game’s features, the main attraction is definitely its free spins mode which offers up to 30 free spins. Players can also take their winnings to a whole another level as wild symbols featured in the free spins mode remain locked in their place for more generous winnings.

Olympus Thunder is another excellent NextGen Gaming release bursting with iconic winnings across 5 reels and 20 paylines as the game includes. In terms of its visuals, Olympus Thunder looks amazing packed with first-class graphics to add more realistic elements to the game.

The game is no less impressive when it comes to its bonus features. First of all, it includes an interesting Zeus Re-Spins bonus mode during which all Zeus wild symbols turn into special expanding symbols which remain locked in their place for three re-spins. There is another interesting mode, the game’s Olympus Bonus mode packed with 40 free spins and tripled winnings.

Fans of classic slot machines will definitely enjoy their Jackpot Jester 50K gaming sessions. The game is a classic, fruity 3-reeled slot packed with a massive jackpot prize. The prize is obviously worth 50,000 coins as suggested by the game’s title.

Other payouts offered in the game include 40 coins for cherries, 60 coins for lemons, 80 coins for plums, 100 coins for melons, 300 coins for golden balls, 400 coins for flaming sevens and finally 2,000 coins reserved for three jester symbols landed on the reels.

As one of the biggest gaming sites online, LeoVegas offers numerous perks to all players who join. The sign up offer is straight out of a fairytale and you get plenty of chances to earn even more cash later.

LeoVegas’ library is bursting at the seams with quality titles including NextGen’s biggest hits. You can play the legendary Irish Eyes and Irish Eyes 2 or try Foxin Wins for free. You can even stare into the eyes of the deadly Medusa for real money if you dare and win epic amounts of cash.

Casumo casino is a brilliant gaming site for newcomers and high rollers alike. It has plenty on offer starting with thousands of games from the industry’s best providers. Nextgen is on that list, bringing with it a bag of its biggest slots.

Apart from the epic Medusa and Medusa II, Casumo has many other Nextgen hits in the library. Explore it deeply and have some fun or play for money. Choose the latter, and you might win one of Nextgen’s massive rewards.

VideoSlots’ ace in the sleeve is the number of games. It has a total of 4,297 (and counting) at the moment provided by the industry’s biggest studios. Nextgen’s games are available in this casino’s library and can be played for free, for real money, or with a bonus.

Enjoy classic hits such as Medusa and Irish Eyes or try to walk in Stanley Ipkiss’ shoes in The Mask. Whatever Nextgen hit you pick, you won’t go wrong.

How good are Nextgen slot machines when it comes to RTP?

Really very good. There is a slot machine that even has the potential of 99.90% but not on every spin. Apart from that there are several slot machines with well over 97% which is also very good. Of course, there are also nextgen slot machines with not exactly high RTPs and these you should know or avoid. That’s why we list the slots with the highest RTPs on ProfessorSlot.

What are the Nextgen slot machines with the highest RTPs?

You should already know the RTP of the currently most popular NextGen slot machine before you play it. And it’s 95.3%. This is below average and if RTP is important to you, you should rather go to other slot machines.